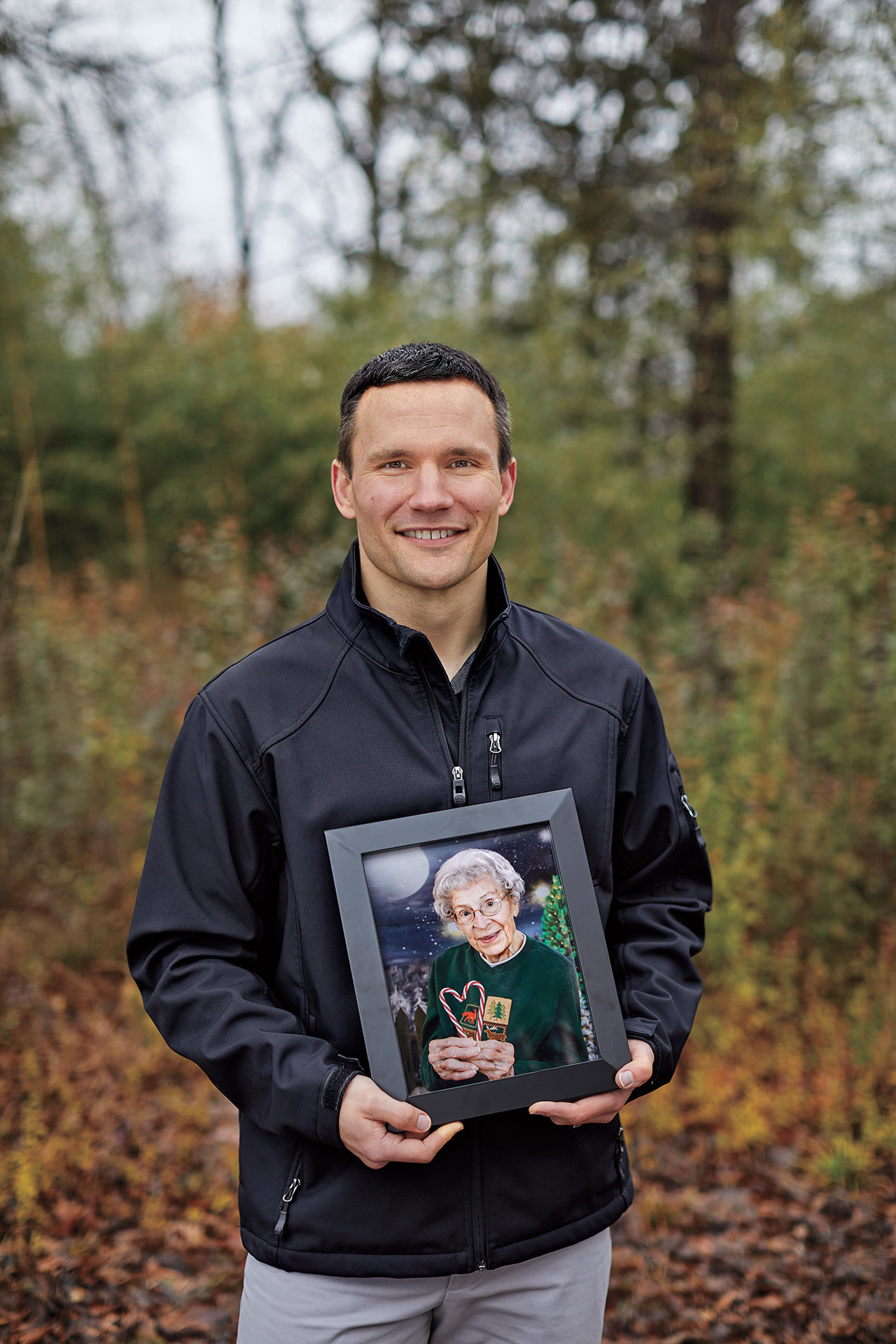 She had seen him through some difficult times.

Could he help see her through the pandemic?

I pulled my cell phone from my pocket, steeling myself to call my grandma in a nursing home some 500 miles away in Ohio. Why is this so hard? Before Covid, I looked forward to these calls. I thought of them as doing my part to help care for her. Now I wondered if I was making any difference in the face of a deadly pandemic, especially one that was hitting care facilities so hard.

Quickly I reviewed the list of things I’d come up with to tell her, the latest games my three-year-old, Amelia, was into: baking cakes for stuffed animals and dancing to Baby Shark with her brother. The word combinations, Jack, now two, was saying: “Doggie, woof. Daddy, bye bye.” Silly stuff Grandma delighted in hearing.

Grandma was more than a grandma to me. I was 12 when I went to live with her while my parents split up. She’d supported my dream of going into the Air Force and so many other things. I wanted to be there for her now if only over the phone. Ordinarily I’d make time to visit, but her facility was in lockdown. Those restrictions should have reassured me that she was safe. Instead, it felt as if she were living on the moon. I couldn’t imagine what Grandma was going through in such isolation. She was 98. Macular degeneration made it impossible for her to read. Or even watch TV. I understood the need for isolation, but separation carried its own health risks.

Maybe it was me who was the problem. I got tongue-tied when I tried to say anything deeper than the usual updates about the kids. I couldn’t spout Scripture the way others could. Wasn’t comfortable speaking for God, period. Not that I was out of touch with my feelings. I just didn’t have a firm enough grasp on them to talk openly, to offer hope and reassurance and comfort. In the military, we used to say, “Hope for the best, plan for the worst.” These days I found myself mostly doing the latter. I worked as a consultant, helping businesses manage change. I’d seen too much to pretend that everything always turned out for the best.

Enough stalling. It had been two weeks since my last call. I tapped in the number. I waited for her answering machine to pick up so I could announce myself. “Hi, John!” Grandma’s voice sang out. “So good to hear from you!”

“Wow, Grandma, you sound great. How are things going up there?”

Without missing a beat, she launched into a detailed report on the family happenings. “Your mom called yesterday and said she was doing yardwork and rummage sale stuff at church. Uncle Chris came out of retirement to help coach the Mount Gilead football team.” She breezed through updates on all four of her kids, nine grandkids and 10 great-grandkids, throwing in colorful commentary along the way. Almost all of it was news to me. Still, she hadn’t said one word about life in lockdown. Was she in denial?

“I’m good,” she said. “There’s no place I need to be, no schedules. My only complaint is the chef.”

“It’s too good,” Grandma said, laughing. “She’s trying to make us all fat.” I laughed with Grandma, comforted that, despite everything going on, her sense of humor, like the rest of her, was razor-sharp. Relieved that she was doing so well.

“I just want you to know how much I love you,” I said. “Take care and we’ll talk soon.” I hung up the phone. It felt as if a load had been lifted from me, though I wasn’t sure I’d done anything for Grandma.

A few days later, I heard the news I dreaded. Someone had tested positive in Grandma’s facility, my mom told me. It seemed only a matter of time before the virus was everywhere there, like a ticking bomb. I thought about calling Grandma, but other than saying I was scared for her, what did I have to share? I didn’t have any actual news. I didn’t want to alarm her. So I waited, and with every day we didn’t talk my fears grew.

Grandma had led a life rooted in purpose. I remembered her telling me about growing up in the Great Depression. How her parents, who’d never been able to buy her a bike, had still managed to find ways to help those even less fortunate. Grandma had enrolled in nursing school, then had to withdraw to care for her ailing mother. When the dean had urged her to put her career first, she’d told her, “This is my family. I owe them everything!”

With the country’s entry into World War II, the nursing program experienced a surge of applications. Grandma had to wait another semester to enroll, months she spent working in a factory building relays for submarines. Eventually she went on to nurse injured soldiers.

Grandma’s service inspired me to enter the Air Force Academy after terrorists attacked our country on 9/11, during my senior year of high school. The academy was so much tougher than I’d ever imagined. Maybe I wouldn’t make it through basic. Grandma urged me to persevere. “This too shall pass,” she said. “Lean on God. He’ll see you through.” Her whole life had been a testimony to her faith. Surely it would see her through now.

When I called Grandma next, however, she sounded down. “I guess you heard someone here tested positive,” she said. “It’s getting bad.”

I struggled with what to say. Reflexively I asked about family. She barely engaged. “I bet you saw some difficult things as a nurse,” I said, hoping to remind her of the strength I’d always seen in her.

For the longest time, the phone was silent. Oh, no, had I said something wrong? Should I have stuck to small talk? Finally Grandma spoke. “After the war, there was the polio epidemic,” she said slowly, summoning the memory. “The hospital was lined wall to wall with kids in bed, suffering. I felt helpless.” She paused. I’d never heard her sound this vulnerable. “But you know what?” she continued, her voice rising. “We prayed and prayed and loved on those kids, and then the vaccine came out and it was a miracle. God can do amazing things.”

He surely can, I thought. We talked a little while longer. Finally it was time to say goodbye.

“I’ve lived a good life, and when the Lord calls me home, I’ll be ready,” Grandma said.

“I want you to stick around a little longer,” I said. “At least make it to 100.” I hung up feeling positive, comforted, as I always did after talking with her. Had I been a help to her?

Soon I got another dreaded call, this time from my uncle. “Grandma had a mini-stroke,” he said. “Her vision is much worse. The doctor says she’s legally blind. For now, she’s still in the same facility, but she’ll likely need more care.”

The news was a punch to the gut. God, how much more can she bear? This time I called immediately.

“Hi, John!” she answered, her voice bubbling with life. “I’m so happy you called!” I wondered again if she was in some kind of denial.

“I was sorry to hear about your mini-stroke,” I said. “But you sound good. Great, actually. I don’t know how you do it.”

“John, I grew up in the Depression,” Grandma said. “My parents taught me that you can always try harder even when you think you can’t, pray harder when you think you can’t. I try to stay positive, no matter what. And what helps me most is talking to you kids. It means the world to me. I feel... cared for. I’m so proud of all of you. I have so much to be grateful for, even stuck in this facility. My life feels fuller hearing about everything you guys are doing. Keep the calls coming! They’re an answer to prayer.”

Suddenly the phone in my hand felt like a lifeline—one that reached both ways. In the midst of all the tumult and uncertainty of Covid, I was helping Grandma stay positive and she was helping me.

The only thing she was in denial of was negativity. I could be that way too. Hope for the best and pray. And don’t forget to call your grandma.